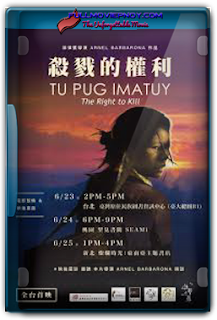 Storyline
Tu Pug Imatuy, which means "The right to kill" in Manobo, follows Lumad couple Obunay and Dawin who are uprooted from their traditional way of life after a military encounter. Soon, they find themselves unwilling instruments in the soldiers' anti-guerilla operations. What will it take for them to reunite with their family? Inspired by actual events, the film tackles the Manobos' struggles against environment plunder and the militarization of their communities. Written by anonymous 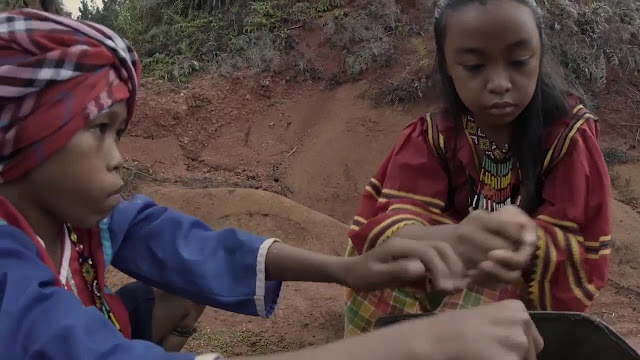 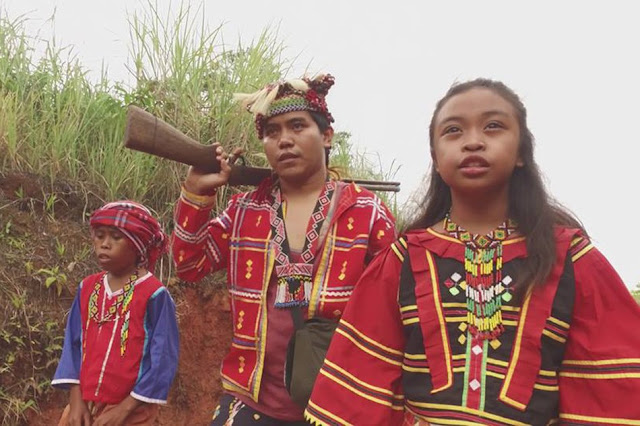 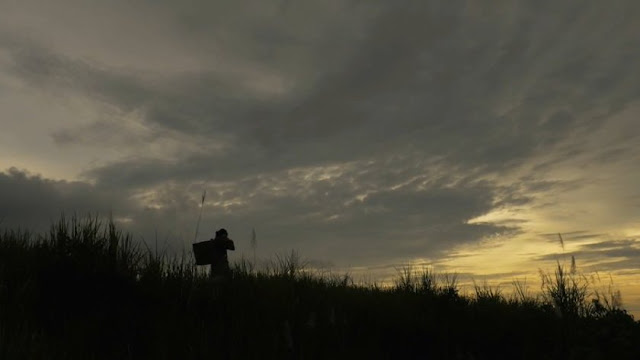 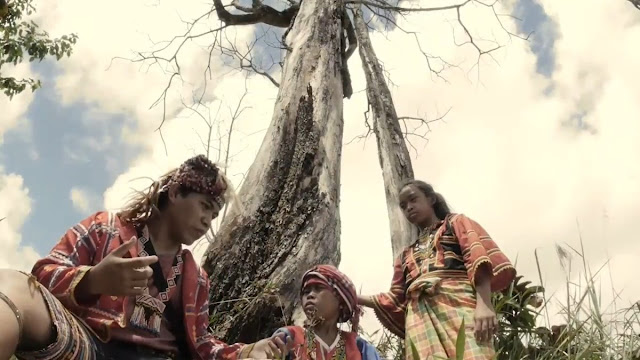 This is, of course, not the first time a Mindanawon filmmaker is honored by the Urian film critics group. Earlier, Arnel Marodquio and Teng Mangansakan have also been cited for their attention-grabbing and distinguished films dealing with Mindanawon realities. And now comes, a younger Mindanawon filmmaker who is following the footsteps of Dayoc, Mardoquio and Mangansakan.

With TU PUG IMATUY (THE RIGHT TO KILL, Arbi Barbarona who hails from Davao City, could follow the same route. Already the film won as Best Film at the Quezon City Cinema filmfest early this year.

This is not Barbarona’s first film. He has directed a few more films including a number of short films.

Barbarona (as both Arbi and Arnel) is that rare filmmaker, as one can see in the credits above. Not only is he the director of this film, but he also assisted in the cinematography, did the editing and sound scoring, as well as took care of its musical score. He is also one of the film’s producers. The only major task in the film that he did not undertake was to play the lead part (a temptation usually for quite a number of Hollywood movie actors turn directors).

This is truly an indicator that Barbarona is an accomplished filmmaker. Having honed himself in terms of the art and techniques of cinematography and editing, Barbarona was poised to become a good film director. With Tu Pug, Barbarona demonstrates his range of talents and skills in filmmaking. One will not be surprised if this film will be considered by the Urian critics for the awards in 2018.

The film is riveting; the viewer’s full attention from the opening to the closing frame does not waver. One’s gaze at the screen is fixed through all the scenes, even as some of these assault the senses in terms of the graphic display of violence and degradation. The viewers are bombarded with images that penetrate their hearts yielding a range of emotions from anger at those who can just so easily violate the rights of the weak to pity for the victims to fear of how these same scenes are still occurring until today. On the other hand, the mind is gripped with disturbing thoughts as to how this situation unfolded in the uplands and which continue to be echoed in today’s headlines both in mass and social media.

The film’s credit indicates that its story line is based on true events that unfolded in the uplands at the boundary of Bukidnon and Davao – the location of the Matigsalug’s ancestral domain in 2014. It follows the life of a Matigsalug nuclear family occurring during a few days of that year. New People’s Army (NPA) rebels continued to locate themselves within this Lumad territory. The Armed Forces of the Philippines (AFP) also continued to pursue them in terms of its guerilla war against the rebels by engaging them in a jungle warfare in a landscape where forests had disappeared owing to massive logging operations and are now being explored for purposes of mining.

Dawin and Obunay are parents of three young children living in this remote upland area. Hunger stalks the land as food becomes scarce even if they continue to gather food including trapping wild boars through holes with pointed bamboo sticks. As the wild pigs fall into the holes, they are not only trapped but are killed as their bodies hit the sharp sticks. The first tragedy takes place with the death of their youngest child who earlier got sick. Securing mongo beans in the main village where the datu resides, Dawin and his two surviving children are arrested on the spot by a squad of fully armed military men.

Upon suspicion that Dawin knows where the rebels hide, the soldiers force him to bring them to their hide-out. But along the way, his wife also gets arrested. Both are then tied together as they are forced to lead the soldiers further into the rebel territory. However, along the way, the soldiers needed to entertain themselves at the mercy of the couple whom they forced to copulate in front of them after stripping them of their clothes (a clear metaphor of stripping them of their human dignity). These are frightful and harrowing scenes, graphically shown on the screen. Ironically, the scene unfolds amidst the beauty of a waterfalls with pristine waters sparkling in the glow of moonlight.

Finally they reach the part where the soldiers claim that they had found proof of the rebels’ presence, namely the existence of a one-room Lumad school where mothers and their children attend classes conducted by a literacy teacher. Accused of being a communist front, the teacher and the parents are harassed and made to be captives with the teacher tied to a post. As evening approaches and the soldiers all sleep without any one watching over the captives, Obunay manages to free herself and gets all of them freed. She and Dawin also make an attempt to escape but are immediately caught again by the soldiers who managed to wake up in the middle of the night.

This leads to the tragic killing of Dawin. The rebels then engage the soldiers in a gunfight, as Obunay escapes. But one part of the squad pursues her. Having mobilized her courage and astuteness, Obunay leads them to the hole meant for wild boars. What happened then provides the final frames of this film. But as credits roll, the real Obunay appears in a documentary short footage retelling the events that took place in 2014, providing the film its powerful ending.

There are many elements that constitute the high aesthetics of this film. The cinematography is quite impressive, considering the limitations of the film’s budget. A number of scenes needed to be shot at night, but the images remain clear. The camera provides details of life in the uplands from the crawling insects to the ferns whose leaves laden with the early morning dew sparkle in the early sunlight. The sounds of the forests are well-recorded and provide the needed atmosphere to establish the film’s space and time constructs. Part of the musical scoring are indigenous chants that are echoed across mountain ranges. Efforts were made to provide sub-titles, but unfortunately some of the chants have no sub-titles.

Considering that Barbarona’s main cast are Matigsalug themselves who are amateur actors, one can only have high praises as to the manner that he gets them to act as naturally as possible. The two main leads Malona Sulatan (Obunay) and Jong Monzon (Dawin) are most impressive not only because they are Lumad themselves but the manner they walk, talk and emote are what one observes while inter-acting with the Lumad. Sulatan especially has the talent to show deep emotions and acts with a sense of confidence, having truly energized the core identity of Obunay. How her face mirrors the pain of being violated as a woman is heartbreaking. Even as she is forced to walk around naked, she retains her sense of personhood and dignity. And one could tell that before the film ends, she would be astute enough to find a way to save her life while exacting the just revenge against her oppressors.

The film while documenting events three years ago remains very relevant in view of the recent pronouncements of President Duterte to bomb Lumad schools for being “communist fronts.” Thus the film ended, but its reality persists. Life, indeed, imitates art. [MindaViews is the opinion section of MindaNews. Redemptorist Brother Karl Gaspar is Academic Dean of the Redemptorists’ St. Alphonsus Theological and Mission Institute (SATMI) in Davao City and a professor of Anthropology at the Ateneo de Davao University. He is author of several books and writes two columns for MindaNews, one in English (A Sojourner’s Views) and the other in Binisaya (Panaw-Lantaw)


Source: imdb.com, wikipedia.org, mindanews.com
Note: * All videos are from random sources, the quality is variable * Copyright of the films, movies are belong to the real owner (Producer or Broadcast channel) *The files will or can be removed if the copyright owner complain to this site. *This site never buy any films and movies from any filming company. *Thank you for always visiting this site and for your support to us
Labels: 2017, Drama